03/18/2014
The 2013 Mazda MX-5 Cup Rookie of the Year returns to the series
with his eyes on the title.
The 2012 SCCA Mazda MX-5 Cup presented by BFGoodrich Tires Champion, CJ Wilson Racing, today declared its intention to win back the title by re-signing reigning Rookie of the Year, Patrick Gallagher, for the 2014 season.   Gallagher, the twenty one year old native of Thornville, Ohio, joins the 2013 Mazda Club Racer Shootout winner, Joey Bickers, teenage stock car racer, Devin Jones and Charles Paquin in a formidable line up.   “Returning for a second season with CJWR is definitely the right move for me. The team and I really hit our stride in the final few races of the 2013 season”. Gallagher’s charge through the field at the Petit Le Mans event, last October, has given him a lot of confidence and a solid platform to build on in 2014. “I’m excited to get back in the car and pick up where we left off in the season finale at Road Atlanta.” 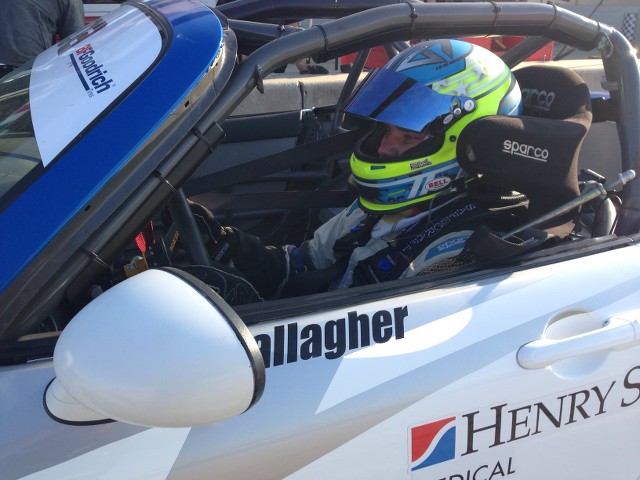 “I’m already driving for the best team in the paddock so it would only make sense to have the best partners,” Gallagher explained. “I am extremely grateful for the opportunity to represent ModSpace, MedBuild and Henry Schein and excited to bring value and return to their respective investments. The relationship has been outstanding so far and I only see it getting better!”   For the team’s owner, CJ Wilson, Gallagher’s return gives him a chance to further develop his team’s driver development program. “That is a big part of our MX-5 program and I’m really excited for Patrick to take the next step forward in his racing career. He showed a lot of speed last year and the experienced he gained will definitely push him towards the front of every race in 2014.”   “ModSpace is very excited about partnering again with CJ Wilson Racing in the MX-5 Series,” stated William Mann, Vice President of Motorsports for ModSpace. “Having Patrick in the driver’s seat carrying the ModSpace, MedBuild and Henry Schein livery on the #28 car is a great opportunity for us. Patrick is a talented driver that won Rookie of the Year honors last year in this series and we know he will do a great job for us both on and off the track.”   Gallagher’s 2014 Mazda MX-5 Cup presented by BFGoodrich Tires Championship bid begins on March 13th at Sebring International Raceway with Race one of a double header in support of the Tudor United SportsCar Championship 12 Hours of Sebring. Race two will take place early on the morning of Friday, March 14th.
0 Fans
Like
1,274 Followers
Follow
0 Followers
Follow
1,274 Fans Love us